The Case For: Dining Alone

If I say so myself, I've got some pretty damn good life skills under my belt. I can rustle up and proudly wear a ridiculous outfit for any given situation, I think I might actually have this "time management" thing down and I can also talk absolute mindless nonsense to any poor old sod without really feeling that awkward. Yep, these are the skills I'm proud of. However, one skill I've harnessed more recently is the ability to ask for table for one without even a tinge of embarrassment. Yep, I do mean taking myself out to dine. 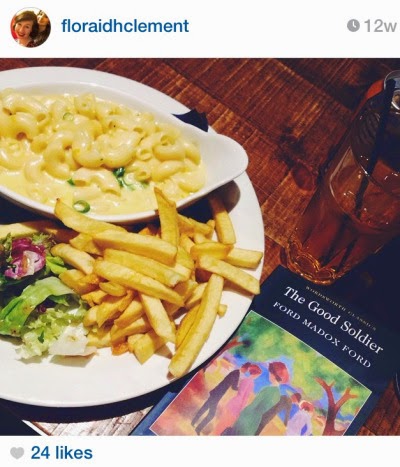 "I don't know how you do it" some friends have admitted in response to this pastime of mine. Hey, I totally get it. There is always an element of self-consciousness involved when doing anything considered inherently "social" by yourself. It takes a while to ease into your own company, particularly if you're somebody who thrives more in social situations. As is very well documented on this blog, I'm an introvert and whilst I have the most brilliant, accepting group of pals a girl could wish for, I like to roll alone a fair bit of time. S'nothing personal - it's just how I feel my best.

But dining alone has always seemed like a different scenario, as though there was actually something a little shameful about it. Even as somebody who prefers to shop and travel solo, going out for dinner seemed like a bit of a stretch - basically, were people going to think I was a bit...mental? A heartbroken girl who's just broken up with her boyfriend and has come to weep in what used to be "our place!!" maybe? My worries were definitely real, but at the same time I was really hungry one day in October and sometimes your stomach just has to win in that struggle with your brain, y'know.

So I managed to do it once, and then I felt able to do it again, and now I do it frequently. I've actually grown to really enjoy eating out alone. Company might be great but solitude brings increased awareness and sensitivity to your surroundings; my inner nosey cow is satisfied by both the amount of people watching I get to do and the snippets of conversation I often overhear. I also just love the feeling of knowing that I am capable of doing certain activities that are considered "social" by myself. Actually, it makes me feel pretty great. Take it from me, after you do it for the first time, you're humming Independent Women in sheer smug glory for a week, at least. 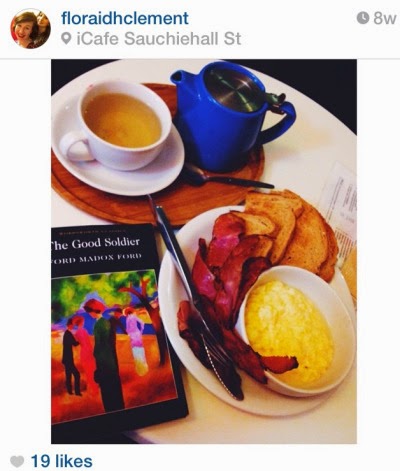 But there's no denying it takes a while to settle into the comfort you need to reach that glory. One thing that makes it much easier to withstand is bringing something to read or do, such as a book or even uni work. Not just sitting gormlessly until someone puts some spaghetti in front of you makes you forget where you are, essentially, and it takes your mind off the fact that you're not in company. But I found that another key in getting over my self consciousness was just to ask that really, is there anybody who's giving much of a shit as to what I'm up to - this lanky girl with bad hair and a book? Seriously, you have to try and remember that whoever's serving you is categorically not wondering why you're by yourself.  Their thoughts are exclusively consumed by all the fun shit they're gonna get up to once they've clocked off, and wondering how it is even humanely possible to co-exist with some of twats they've had to deal with today. As somebody who has had to work with the public, you must believe me on that. It is a fact.

Knowing that everybody is really just minding their own business is a fact I feel pretty lucky to have learnt. If you ask me, there's nothing quite like brushing your hair and smiling in the mirror, thinking how damn good you look for your dinner out, your little date with you. You're doing dinner alone. You're self-reliant, independent and not afraid of - shock horror! - your own company, and you even get a nice meal out of it. You're a grown up now, and this is how you know it's the real deal; you've grown deeply emotionally attached to a bar at some point since you turned eighteen, you've had at least one pregnancy scare and now you're also able to go and enjoy the nicer things in life yourself.

So, this isn't so much of a blog as it is really a dare. I dare you to wake up one day soon, make a conscious decision to get the hell over your worries and then take yourself out for a meal somewhere you've always fancied visiting. I dare you to not worry what strangers might think of you when you walk in and ask for a table for one, before ordering your meal as you sit with a book, newspaper or tablet. I dare you to smile afterwards and realise "hey, I guess that wasn't so bad!" because it just really isn't. Remember, these are dares, so don't forfeit the ability to create your own bliss.
Posted by Unknown at 11:26

Email ThisBlogThis!Share to TwitterShare to FacebookShare to Pinterest
Labels: introvert confessions, life, not being grumpy